In 1999, In Britain, Margaret Beckett, then leader of the Commons, hosted a closed conference for industrialists and intelligence officials to warn about the growing risk of electronic attack on Britain’s Critical National Infrastructure.

I found the following press cuttings from a magazine called “Internet Business”, from 1999 at the time. John Doody, then of CESG is quoted:

Apparently, I went on to say

The really interesting bit however, is from Margaret Beckett 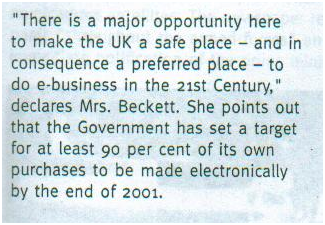 Sounds just like part of the current UK Cyber Security Strategy. What was needed to make it happen:

Twelve years later, we are talking about the same things – standards, better tools and information sharing. I wonder where the debate will have moved to by 2020?